Specific Performance for Commercial or Investment Properties?: The Court of Appeal Clarifies 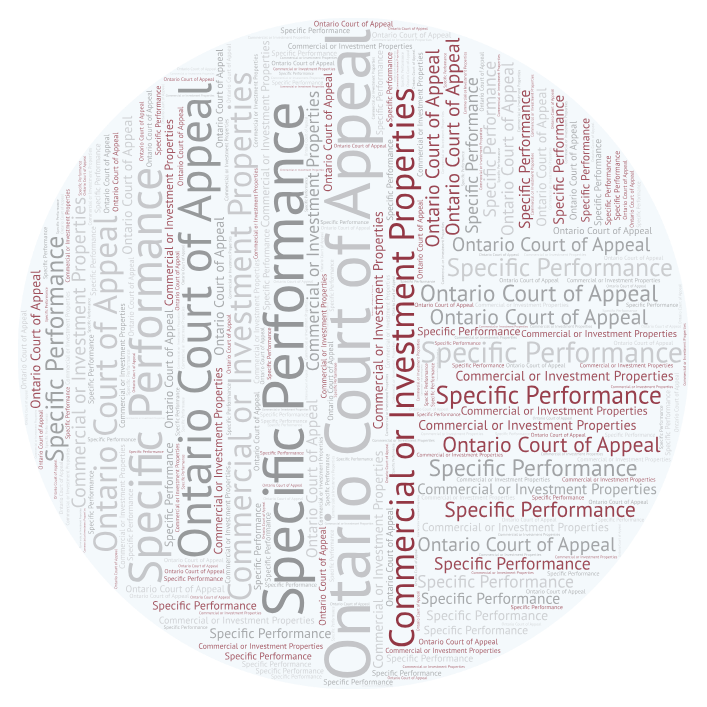 Specific Performance for Commercial or Investment Properties?: The Court of Appeal Clarifies

The decision was an appeal from an application for specific performance of an agreement of purchase and sale arising out of an aborted sale of a mixed commercial/residential use property in Port Perry, Ontario.

The matter then went before the application judge, Justice Pollak of the Superior Court, for a decision on the merits as to whether the purchaser had a claim for specific performance.

The application judge considered the interpretation of the mortgage provision and found that the mortgage assumption condition was a “true condition precedent”, that had not been satisfied by the parties by the required date, which rendered the agreement null and void.

However, of note, the application judge also considered whether the remedy of specific performance would have been an appropriate remedy if the agreement of purchase and sale had still been valid. She considered the nature of the Property and concluded that “the value of that property to the applicant [the purchaser] was for investment purposes”. As such, she declared she would not have ordered specific performance of the agreement, as she held that the nature of the property meant damages would have been an appropriate remedy.

The Court of Appeal noted that the evidence in this case established that there were no suitable alternative commercial properties in the Port Perry area, and that, because of its unique attributes, the Purchaser had been trying to purchase the specific property since 2015.

As such, the Court of Appeal held that the purchaser had demonstrated the legal prerequisites for specific performance, and granted an order accordingly, subject to a further determination of one aspect of the mortgage issue. The purchaser’s appeal was therefore allowed.

Takeaways from the Decision:

In this decision, the Court of Appeal provided confirmation that the remedy of specific performance can still be available in cases of commercial or investment properties.

While previous decisions had suggested that the remedy of specific performance was typically inappropriate in commercial circumstances, and that damages would usually suffice, this decision confirms that the test for specific performance, mainly the uniqueness of the property, can be applied not only to residential properties, but to commercial and investment properties as well.

It is worth noting that the record before the Court of Appeal clearly showed the Property at issue was unique. In fact, the evidence confirmed that the purchaser had been trying to buy the Property for a number of years, which reinforced its uniqueness. It remains to be seen whether Courts in subsequent decisions will be as willing to grant specific performance in relation to investment properties in cases where the uniqueness of the property is not as well-documented or well-established.